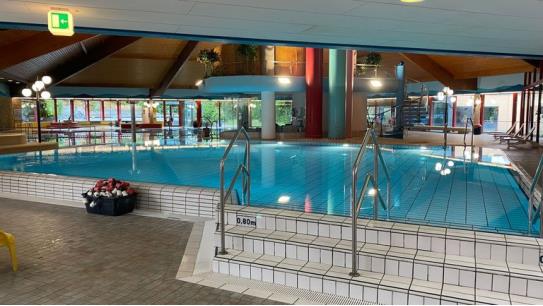 The majority of Nuremberg’s indoor swimming pools remain closed in summer. Whether they open again in the fall depends on the situation. (Source: NEWS5 / Deyerler)

Nuremberg must save energy. That’s why the city closes most of its indoor pools in summer. What’s next? And what does that mean for employees?

Children splashing around; parents chatting; swimmers training, actually, it would be very busy here in the Nordostbad. But instead of screeching there is silence, instead of cooling there is emptiness. The energy crisis has arrived in Nuremberg .

“Closed” is written on a sign on the front door of the Nordostbad – and it will stay that way for the whole summer. As in the other two municipal indoor pools, in Katzwang and Südstadt, only the Langwasser indoor pool remains open in August. The reason for the drastic measure: save energy. The city leaders see themselves forced to do this in view of the energy crisis caused by the Ukraine war. The news caused a nationwide stir on Friday.

“We want to send a signal during the crisis,” explains Joachim Lächele, the second plant manager of the municipal company NürnbergBad. Bathrooms are very energy intensive. The closures are now your contribution to ensure full energy storage in winter, he says.

Most of the bathrooms are heated with district heating. “And if there is no more gas, then less district heating,” explains Lächele. Those responsible are examining alternative energy supply options, such as photovoltaic systems or solar thermal systems on the roofs. That should help us make ourselves more independent.

Wouldn’t it be a solution to lower the water temperature? The answer is no. Although this energy-saving measure would probably not disturb the competitive swimmers, consideration must be given to those who move more slowly in the water: children, older swimmers, people with disabilities. “We would protect their swimming and exclude them.”

Closure of bathrooms: what about the employees?

What about the employees? There are no layoffs, explains Matthias Bach, the operational manager of NürnbergBad, when asked on t-online. The employees would be used differently, for example in the outdoor pools or for revision work.

Normally they would meet around 20,000 public bathers in the Südstadtbad in August. At the same time, around 15,000 people from Nuremberg are staying in the Nordostbad. They would all have to switch to the indoor pool in Langwasser or the outdoor pools. The city of Nuremberg is therefore anticipating a drop in income of 60,000 euros , explains Bach – depending on the weather . “However, this is offset by savings in energy costs and expenses that are expected to be significantly higher than this figure.”

Mayor: “The situation is serious”

“The situation is serious,” says the responsible mayor Christian Vogel in the press release. “One thing is clear: we have to save energy.” It is also clear that significant savings do not come without cuts and inconveniences.

“We are reacting to the emerging energy shortage and are freeing up thermal energy for 383 households or around 1,500 people in Nuremberg,” the statement continues. NürnbergBad is one of the city’s major consumers of heat and electricity. In total, the entire area requires around 9.4 million kilowatt hours of district heating and around 800,000 kilowatt hours of gas.

What about school swimming?

Therefore, the indoor pools will now be drained from July 16th to September 25th. Whether they will actually be reopened afterwards depends on the situation in autumn. If there is still a shortage of gas, according to Lächele, consideration should definitely be given to leaving the indoor swimming pools closed in winter as well.

The “Closed” sign on the entrance door of the Nordost indoor pool refers to the natural garden pool in Erlenstegen, about five minutes away by car. The municipal outdoor pools are not affected by the closures – their opening hours will be extended, as will in their bathing season until September 25th.

School classes should be able to switch to the Westbad and Stadionbad as well as the Naturgartenbad for their swimming lessons. Managing director Bach explains how many schools want to or can make use of the alternative offer.

In order to enhance capacity and speed up market penetration,Chinese battery manufacturers have tried all their best recent years, keep busy with taking lands and building factories,due to the high boom growth of the EV market. However, in terms of the industry, battery manufacturers’ aggressive expansion is not only concerned about the [...]