How to Charge LiFePO4 Battery?

How to Charge LiFePO4 Battery? 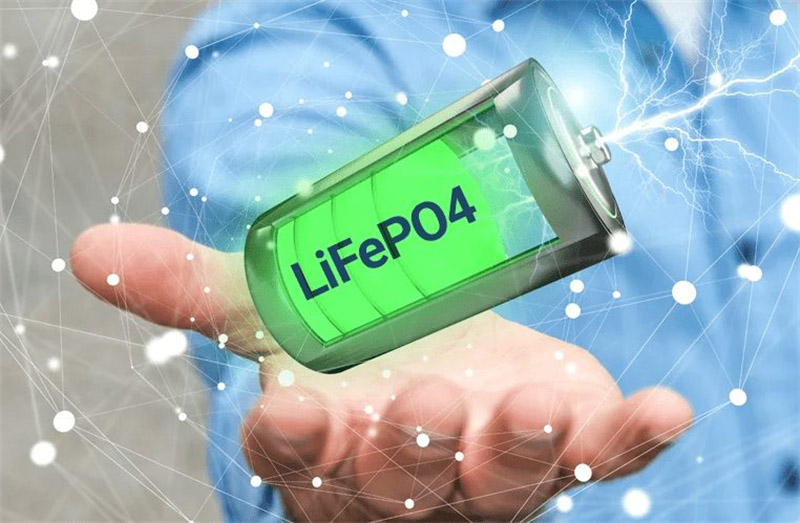 If you’re looking to prolong your battery life while still maintaining its performance, then knowing the best ways to charge a LiFePO4 battery will really come in handy.

There are several lithium battery chemistry currently on the market, but the LiFePO4 is undoubtedly the best one to date, particularly for applications that require a large battery bank.

Due to its extremely stable chemistry, LiFePO4 batteries provide a much safer option than other lithium technologies, which can lead to a fire if mishandled.

The LiFePO4 batteries are also much more resistant and can withstand electrical and thermal abusive conditions. This means they can stand the test of time, performing a large number of cycles without compromising their performance. 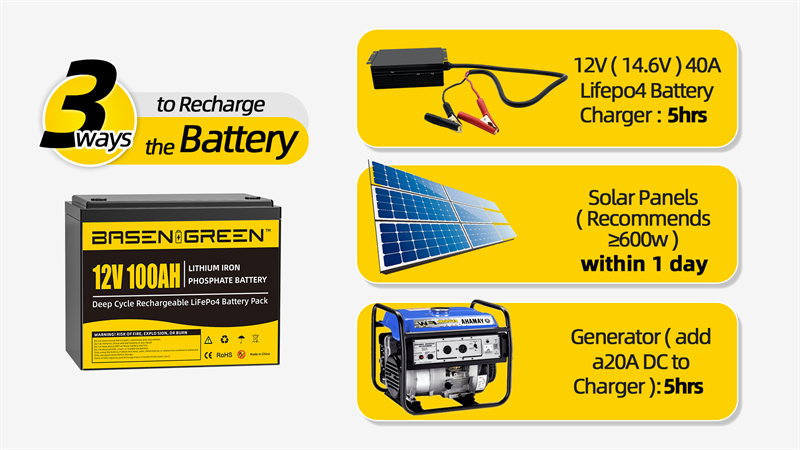 One of the best ways to charge a battery is using a charger that matches the battery’s chemistry since each one has its particularities.

A smart charger can be adjusted according to the LiFePO4 battery charging profile. This maximizes the battery’s performance and lifespan by using an optimized charging technology.

Using a solar energy system to charge LiFePO4 batteries is not only possible but highly encouraged.

That’s because the energy being stored is not just being taken from another energy source (like shore power), it’s actually being generated by solar panels.

Whether in a home, a boat, or an RV, a solar energy system looks pretty much the same :

Once again, correctly sizing the components is key to maintaining the system running appropriately.

So using a charge controller that can efficiently charge the LiFePO4 battery – respecting its charging requirements – is crucial to ensure that the battery functions well and for a long time.

3. Using An Alternator (And A DC-DC Charger)

And last but not least, another great way to charge a LiFePO4 battery is using an alternator. This is a great solution for RVs and boats that have a battery storage setup.

What Is An Alternator?

An alternator is simply a generator that converts mechanical energy into electrical energy. It generates alternating current (hence the name), which the rectifier attached to the alternator then converts into direct current.

This device is an essential part of every combustion engine vehicle’s electrical system. It charges the starter battery, used to start the vehicle’s engine.

With a few adjustments, you can use this electrical system to charge your battery bank (in this case, LiFePO4 batteries) while driving your vehicle.

Because LiFePO4 batteries have a low internal resistance when not fully charged, they can draw any amount of current from the alternator, which can overheat the alternator and damage the battery.

A DC/DC charger acts by limiting the current drawn from the alternator, avoiding the overheating issue. It also regulates the output voltage to the required charging voltage of the LiFePO4 battery, protecting it from overcharging.

What Happens Inside A LiFePO4 Battery When It Is Charged? 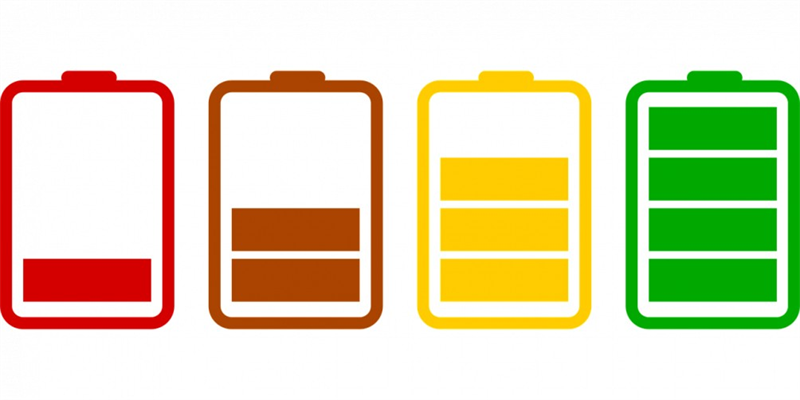 Before we can successfully answer this question, here are a few important things to know:

Lithium Iron Phosphate cells are made of four main components:

Below is an illustration that helps to understand the charging process:

So when a LiFePO4 is charged, the application of external power forces the electrons to flow to the negative electrode. This result is the flow of lithium ions from the cathode to the anode.

When discharging, the opposite happens. Lithium ions move from the anode to the cathode, while electrons flow to the positive electrode, through the load.

Once fully charged, the lithium ions in the battery are located mostly in the graphite, so there aren’t many electrons left to move from the cathode to the anode.

At this point, the application of external power should stop. Battery Management Systems detect when the battery is fully charged and cease the charging process, avoiding overcharging.

What Is The Safest Way To Charge A LiFePO4 Battery? 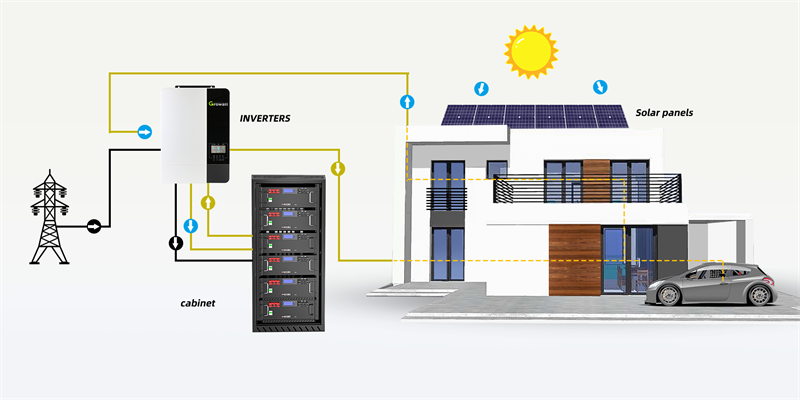 Unlike other lithium battery chemistry, the LiFePO4 is very safe due to its superior thermal and chemical stability.

That’s because LiFePO4 is naturally a stable compound. The P – O bond (in the PO43- species) is quite strong, so when the battery is abused (overcharged or short-circuited), the oxygen atoms aren’t released so easily.

As a result, lithium iron phosphate cells are much harder to ignite. This is an important feature that makes them far superior to other Lithium battery chemistry.

Even though LiFePO4 batteries are a relatively safe technology, it’s extremely important to respect the charging parameters discussed in this article in order to avoid safety risks.

The safest way to charge these batteries would be respecting the exact specifications of the battery, in terms of voltage, optimal charging temperature, use of appropriate wires, etc, whether you use a LiFePO4 charger, a solar system, or any other way. 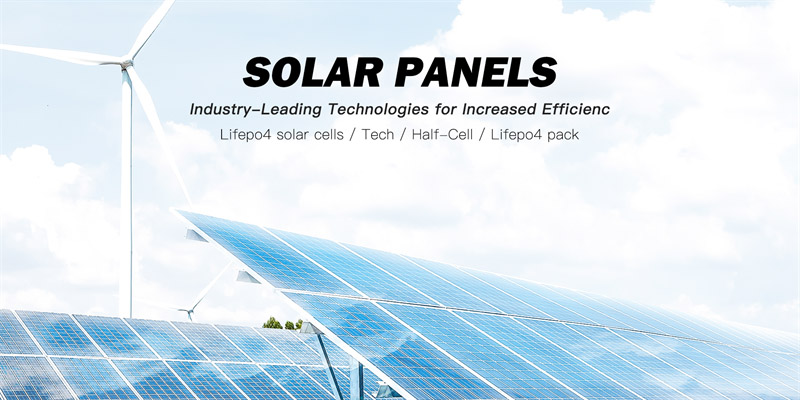 Simple answer: it is POSSIBLE, but you have to be VERY CAREFUL and you RISK your battery life.

Ultimately, using a battery charger with a specific Lithium charge algorithm is the best option for maximum performance and lifespan of any lithium battery.

You can charge your LiFePO4 batteries after each use or when they have been discharged up to 80% DOD (20% SOC).

When attempting to charge a Lithium battery below 0°C / 32°F a chemical reaction referred to as “Lithium Plating” occurs. Lithium plating is caused by the charge current forcing the lithium ions to move at a faster reaction rate and accumulate on the surface of the anode.

Having a BMS that can monitor the batteries temperature will be beneficial and convenient.With the touch of a button you can see what the standing temperature of the battery is and therefore whether it is safe to charge.

Although LiFePO4 batteries can be discharged to 100% of their capacity. To optimize the performance of your LiFePO4 battery, achieve a higher cycle life, and avoid the BMS disconnecting the battery, we recommend limiting the discharge to 80% capacity.

If the BMS disconnects the battery due to low voltage, at 100% depth of discharge, remove the load and recharge with a LiFePO4 charger to reactivate the BMS.

How does BMS Boost the Battery life and Performance？

How does BMS Boost the Battery life and Performance？ BMS tasks include voltage and current control, thermal management solutions, fire protection, and cybersecurity. In this article, we explain the main battery-related risks and ways that BMS can overcome them. BATTERY PROTECTION WITH A BMS A rechargeable battery [...]

What is the Cheaper Way to Stay Warm in This Winter?

Electricity and Gas Price Increases From 1 October What is the Cheaper Way to Stay Warm in This Winter?On Saturday 1 October, the cost of electricity and gas will increase significantly for families and small businesses; it is the update with which every three months [...]

12V lithium battery pack normal type is the easy-to-use entry-level model 12V 100Ah standard type account over 29.32% on monthly sales of BASEN battery packs. 1、made of Grade A 3.2v prismatic; 2、over 5000times cycle life; 3、Portable and small; We started to produce and sell 12V battery packs in 2020,have established [...]